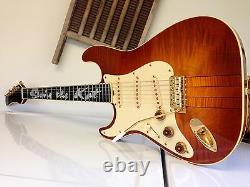 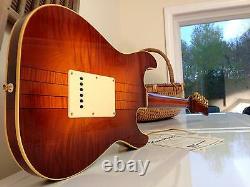 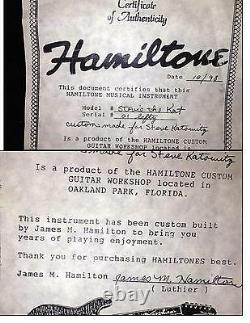 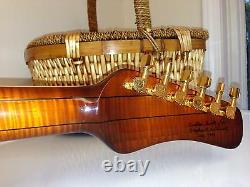 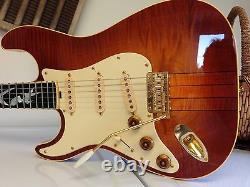 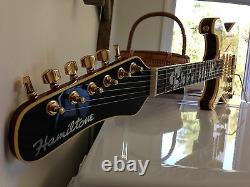 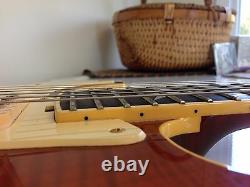 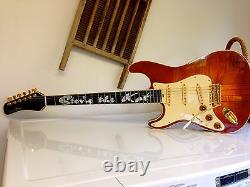 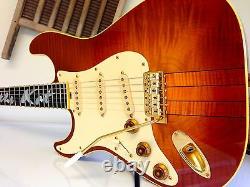 Here is Justin Sharon of Soul Alysum doing couple takes on this Great One One EVER Made Left Handed by James Hamilton (same guy who made SRV famous Hamilton). I can not play a lick on a lefty, and do not know anyone close that plays left handed. So Justin came to my shop and bought the Blockhead Firstborn Amp I had, I threw this baby at him, and go play it..

AS YOU SEE, It is Unreal in Everyday! Both takes are straight into Amp, Guitar, Justin, and a cord... Soul Asylum Guitar Player Justin Sharbono & SRV Hamiltone Lefty Guitar Eddie Vegas - YouTube. Video will open in a new window.

Below is a right handed Hamiltone video I done in my shop.. I got a Right handed one for sale also.. SRV HAMILTONE JAMES Hamilton Made.

Only Left Handed One EVER MADE. HAND BUILT BY JIM HAMILTON. Same Exact Hands that Made SRV.. Which Billy Gibson of ZZ Top paid Jim to make for SRV, as a gift.. This also was made in 1998, All the Rare ones made by Jim, Only a hand full.. 1 Hand that show up for sale are like made 2006.. This is Oldest I seen for sale Ever..

This is a Left Handed SRV Hamiltone.. SRV Same as Stevie's, but Lefty.. James can NO LONGER Make these.. He and his partner had a fallin out..

I got this from original owner who James made it for. This is a ALL Hand Made, KILLER AXE. The Orig Owner was talking to James about being different than Stevie Ray Vaughan in Fretboard.. James said, I always have called SRV, Stevie the Kat when talking to him, or about him.. He is Stevie the Kat..

So Steve had James Hand Carve what you see in Fretboard.. The Guitar weighs 7lbs 15 oz... No need to go writing. You will Not be disappointed on this Rare Axe!

Ships in Original Case, COA, Trem Arm... All that is came with new.. True JOY to own & play, and experience!

Wikipedia on SRV about his Hamilton. Main (also known as Hamilton or the "Couldn't Stand the Weather" guitar) was a custom Fender Stratocaster-style guitar made for Vaughan by James Hamilton in Buffalo, NY. It was presented to Vaughan by James as a gift from Billy Gibbons on April 29, 1984. [11] This guitar features a two-piece maple body and a "neck-through body" design.

It also originally had EMG preamped pickups, but Vaughan didn't like the pickups in it. His next music video was about to be made, which was "Couldn't Stand the Weather", and didn't want to get Number One wet during filming, so he used the Hamiltone for filming. The EMG pickups and Gibson style amber top hat knobs were changed in June 1984.

Its fingerboard is ebony with a mother-of-pearl inlay that read "Stevie Ray Vaughan". The guitar was originally set to be made for Stevie in 1979, but the plan was dropped when Vaughan started using his middle name "Ray", as he was known as "Stevie Vaughan" at the time. The item "1998 James Hamilton Left Handed Hamiltone SRV Guitar Only Lefty EVER Made" is in sale since Tuesday, August 4, 2015. This item is in the category "Musical Instruments & Gear\Guitars & Basses\Electric Guitars". The seller is "eddie-vegas" and is located in Cloquet, Minnesota.

This item can be shipped worldwide.